Our history began in 1948 as a theatre group by the name of Whitby Modern Players. The group folded and there was a hiatus in theatre activity in Whitby until 1956, at which time the Whitby Theatre Guild was born which presented many plays, notably Blithe Spirit. With very little money in the bank, ingenuity was tested when even the simplest set had to be built. In those days, Whitby Theatre Guild presented their plays in the auditorium of the old Whitby Town Hall, which in former years was a well-known Vaudeville Theatre where Whitby audiences enjoyed many travelling road-shows. The very large stage offered nothing in the way of technical equipment except a row of foot-lights and an antiquated dimmer. In the early 1960s, the Town Hall was demolished to make way for the new headquarters of the Whitby Fire Department. Homeless, Whitby Theatre Guild spent the next two years presenting plays in Church basements, the Whitby Psychiatric Hospital, and in High School auditoriums.

In 1966, the federal government encouraged towns and cities across Canada to form Centennial Committees to choose a project that would be a permanent reminder of Canada's centennial in 1967. Whitby's Centennial Project was the former Ontario County Administration building. After extensive restructuring, the former Court Room within the building was converted into a theatre, complete with a stage but no seating. The Town agreed to the use of the boxwood chairs which had to be borrowed from other rooms in the building each time a play was presented. For some make-shift lighting, 5-pound jam tins complete with lamp-sockets were assembled and used as on-stage lighting until our group could afford proper equipment.

Our first proper theatre-type seating came courtesy of Famous Players who were demolishing one of their Hamilton theatres. The deal was, we could have two hundred seats for one dollar apiece. A small group went to Hamilton, and after unbolting the seats, they loaded them and returned to Whitby. More volunteers were on hand to install those seats which served the theatre for twelve years until being replaced. The name of the group was changed to Whitby Theatre Company from Theatre 1 in 1972 which was later changed when our group was advised that the word "Company" would be mistaken for "profit-making". It was then decided to change the name to Whitby Little Theatre in 1984, and later Whitby Courthouse Theatre in 1987, which we continue to use to this day, to better reflect the community nature of our group and the historical significance of the theatre and building which we call home. 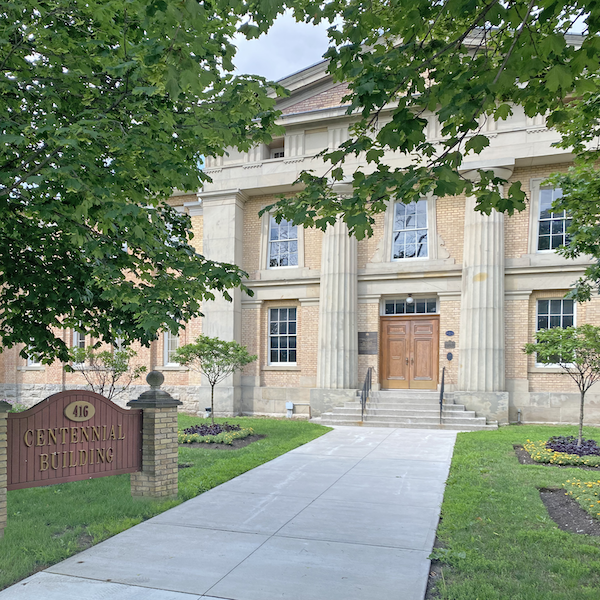